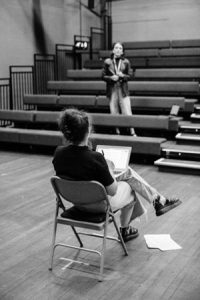 In March 2019, we chose the first ever recipients of the first ever Bill Cashmore Award – writing partners Eve Cowley and Elin Schofield, recently graduated from Sheffield University. And I couldn’t have hoped for a more suitable pair to kick us off.

In their ten-minute Scratch performance of what would become the play ‘Screwdriver’ they revealed their massive potential. With Eve’s mesmerising performance, Elin’s strong direction, and revealing their talent for comic but hard-hitting writing, they won out over an incredibly strong field.

And there began their year as Bill Cashmore Award winners, a year which culminated in Screwdriver headlining the Lyric’s Evolution Festival in February 2020.

Their funny, clever, intriguing script also has a social conscience – and these are all the things Bill was passionate about. In Screwdriver they have shown us a glimpse into someone else’s world. And they do this not by hectoring, lecturing or boring us, but by making us understand, feel for, and grow to love a cast of women prisoners, and the officers who look after them – people whose life choices we can now empathise with rather than condemn. And by making us laugh. And that is what the Bill Cashmore Award was set up to do.

Next year’s winner(s) will also be chosen with this ethos and those values in mind.

The massively positive response to Screwdriver means we can now try and help take it further – a national tour perhaps? The Edinburgh Festival? We are on the case so watch this space and I will keep you posted about how we aim to help Eve and Elin take the crucial next steps in their careers.